“People are crazy and times are strange,
I’m locked in tight, I’m out of range,
I used to care, but things have changed.”

Artificial intelligence, autonomous driving, machine learning. In today’s world, COVID or no COVID, surely one of the least contentious statements we could make is that technology and automation are the way of the future.

So how do you find value when so many different innovations are vying for your attention and investment?

If you follow today’s hottest buzzwords and market sectors, you’ll find the common factor in all these innovations is computing power.

The first Central Processing Unit (CPU) was invented in 1971 and has been the backbone of all computer systems for the last 40 years.

The CPU is the brain of the system – it takes in raw instructions, assigns tasks and then spits out processed information that the rest of the computer can use to run.

Think of the CPU as the only chef in a restaurant; orders come into the kitchen (tasks from your computer), the chef then starts preparing each ingredient one by one, and then sends the finished meal back out to be served. The problem is, our chef can only do one task at a time, and when a complicated order comes in the entire kitchen slows to a crawl.

Enter the star of this note, the Graphics Processing Unit (GPU); once only associated with creating images for computer graphics and video game consoles, the GPU has become the catalyst to a faster computing since it can execute multiple processes at once.

In our kitchen analogy, imagine the GPU as an entire team within the kitchen.

A complicated order comes in, our head chef (CPU) tells the team to make the dish. Each ingredient is prepared simultaneously, so in a fraction of the time that complicated dish is finished and ready to be served.

Own the general store

MarketWatch’s Therese Poletti made a great analogy about the Californian Gold Rush which fits the theme of this note well:

“Instead of rushing to the Sierra Foothills with all the miners who in 1849 were seeking their fortunes panning for a limited vein of gold, a lot more money was made by San Francisco entrepreneurs who sold supplies, or housed and fed the miners.”

The applications for GPUs are practically boundless in a new age of technology, and this is one area where we may easily find value in technological change;

buying a successful chip maker may be the equivalent of buying an autonomous vehicle manufacturer, A.I company and quantum computing developer combined.

Possibly the best way to explore the question “how do I find value investing into GPU technology” is to look at some of the major industries where they are driving change.

The computer in a self-driving car needs to process enormous amounts of data each second to interpret information about the road it’s on, where it’s going and any hazards around it.

Qualcomm (QCOM:NASDAQ) announced in January that their new chip system ‘Snapdragon Ride’ may be used in autonomous vehicle production as soon as 2023, including robo-taxis and freight vehicle applications. They are also hotly pursuing a takeover bid of NXP Semiconductors (NXPI:NASDAQ) for their already established GPU and chip business.

Intel (INTC:NASDAQ) and Nvidia (NVDA:NASDAQ) both have horses in this particular race, with the latter up until recently implementing its Drive AGX system into Tesla cars (who have since begun developing their own chip). Both are already successful companies outside of this industry with the R&D and resources to push greater technological improvements in the coming years.

The graph below from JP Morgan shows the potential scale of these chip volume and the growth that GPU processing stands to gain in this one sector: 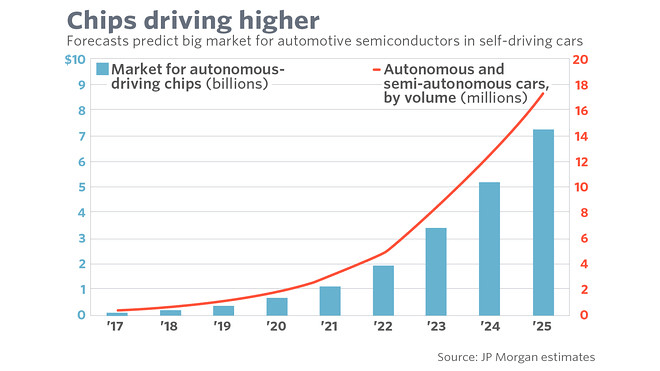 As a house we’re bullish on the growth of A.I. and it seems we are not alone – look at almost any online service and you’ll see that the term ‘A.I.’ has become the equivalent of ‘organic’ or ‘artisan’ – regardless of if it makes much of a difference, it attracts a premium.

U.K based Graphcore (unlisted) entered into competition against market giant Nvidia this year with an A.I. processor, and has already attracted funding from industry giants Microsoft (MSFT:NASDAQ) and Dell (DELL:NYSE). In the A.I. industry, a four-year old startup is now valued at USD 1.95 billion, and it shows no sign of slowing down.

In July 2020, the A.I. chip market was valued at approximately USD 7.8 billion. It is projected by Industry Research to be worth USD 108.5 billion by 2026. Interestingly Asia-Pacific is projected to be the most lucrative industry, as many readers will know we are particularly fond of SenseTime, currently the world’s most valuable A.I. company at USD 9.8 billion, based in Hong Kong.

The era of machine learning is truly upon us, from algorithms recommending our Netflix films (75% of all users elect films recommended by said algorithms), improving trading algorithms and processes to expanding possibilities for space travel and exploration.

An article released this year from Forbes estimated that the global machine learning market would be worth USD 30.6 billion by 2024, up from USD 7.3 billion today.

IBM (IBM:NYSE) is the largest owner of machine learning patents globally, 5,570 of them specifically. SAS Institute and Microsoft are currently the two fastest growing AI platforms.

There are a host of active players in this growing market out there, with many more start-ups entering the show with innovative new designs of their own. Some may see consolidation or buy-outs, some may become new industry leaders.

What is clear is that the momentum is towards a strong take-up of technologies that further automation and demand greater computing power. I’ve only named a handful of new technologies which require GPU’s and chips, there are a multitude of others and all of them will show similar trajectories of growth and development.

Like San Francisco gold-rush era entrepreneurs, it may be worth our time to look at ‘owning the general store’ – we don’t need to pick the best sector of an industry if we can own the backbone of the entire market.

READ TIME 7 mins READ MORE
As with all Federal Budgets, there are winners and losers, where during election years, the incumbent government usually seeks a higher spending agenda to create the optic there’s more winners than usual, and they’re looking out for everyone. In that...
READ MORE

READ TIME 5 mins READ MORE
Funds have been trading on listed exchanges since 1990, beginning life as ‘index trackers’ which sought to replicate the movement of the underlying index. From a single ETF listed on the Toronto Stock Exchange, there are now over 2,200 ETFs...
READ MORE