Worried Australians have stockpiled fresh Australian banknotes during the current pandemic, with Note Printing Australia issuing over $10billion worth of new notes year to date, increasing the total supply of bank notes 13% from 84 to 95bln AUD.

This is an interesting data point as this has happened during a healthcare scare where cash transactions have declined and electronic payments such as EFT or tap-and-go have surged.

While some have attributed this to people wanting to keep “some extra money at home”, I believe this isn’t so simple and may be individuals and corporations seeking to avoid any future perceived threat of negative interest rates. 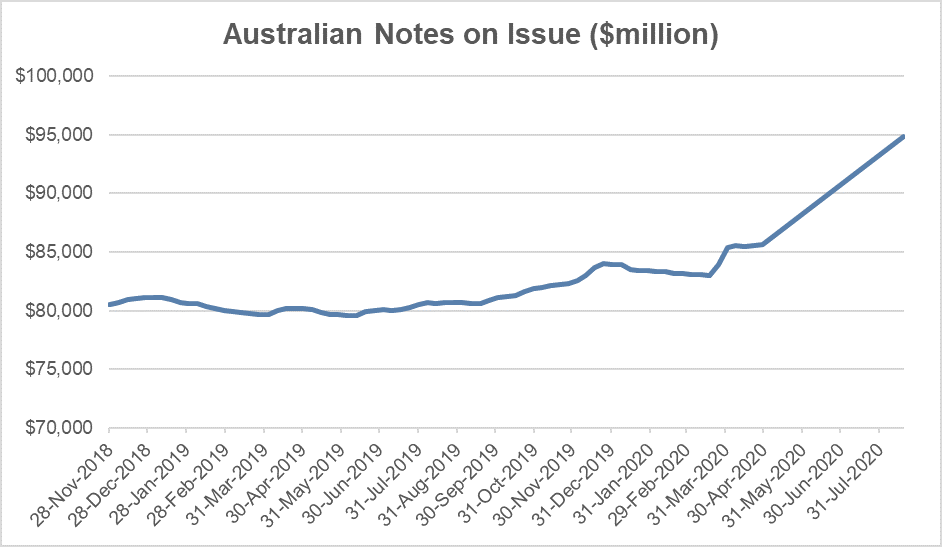 Note Printing Australia (NPA) is a wholly owned subsidiary of the Reserve Bank of Australia and produces all our domestic currency and passports in a state-of-the-art facility in Craigieburn, Victoria.

NPA is known for producing the first polymer (think: plastic) banknotes back in 1988, and also prints banknotes for several other countries (New Zealand, Canada, Romania, Vietnam etc.) due to its high standards of quality and difficulty to counterfeit.

The NPA facility in Craigieburn is also comprised of a National Banknote Site that has been operational since August 2018. This site stores, processes and distributes banknotes to domestic bank branches based on demand for currency.

Logistically, NPA keeps inventory for “management purposes” so that it can accommodate growth in the number of banknotes due to seasonal fluctuations in demand, or to meet contingency needs in the event of systemic shocks.

However, they produce new banknotes (like they are currently doing) based on demand (“consignment”) where commercial banks are requesting new cash to be printed. 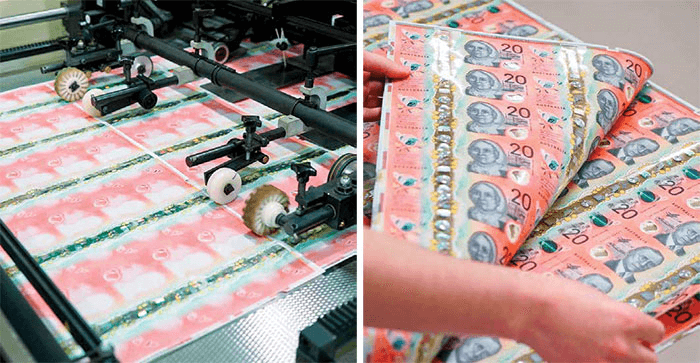 We first started describing economic downturns as “recession” or “depression” from the Great Depression.

Prior to this, these drop-offs in economic activity were described as a “panic”

An economic panic – such as the downturn resulted from earthquakes, wars, pandemics and business cycles sees a rise in “precautionary savings”, relative to individuals’ incomes.

This is due to increased uncertainty of future events, and people save more money because of the unknown future.

This has been very common in previous pandemics of the last eight centuries.

So why the cash hoarding now?

This pandemic is no different to others in that the increased uncertainty has led individuals and companies to stockpile cash assets.

This refers to not just physical cash, but cash in a bank.

Large cash positions are being accumulated because of both these reasons.

But what about negative interest rates?

The merit of holding increased amounts of cash is less when cash assets are not a store of value, because of negative interest rates.

i.e. Negative interest rates cause cash in bank to no longer be a store of value. This means that if you hold $100k in a bank account and the interest rate on the account is -0.5% p.a. – something experienced in Europe right now – then your $100k will be worth $99,500 in a year.

But if you hold PHYSICAL cash, a bank can’t charge you a negative interest rate and it can be avoided.

Also, if you are a banking institution, physical cash or bank account cash makes no difference, they’re both considered High Quality Liquid Assets (HQLA) for your liquidity purposes and all reporting as a cash asset on your accounting statements.

Meaning, if you are a banking institution then there’s no penalty in your regulatory metrics for holding physical cash or electronic cash.

Banking institutions request physical cash from the RBA/NPA that is delivered to branches around the country or kept in the NPAs storage facility for safe keeping.

The RBA publishes a month-end summary of the current banknotes on issue, by denomination.

I find this data very telling as it shows what notes are in demand.

At present, $50 and $100 notes are those being withdrawn, while $5 and $10 note supplies have decreased this year.

The retirement of $5 and $10 notes makes intuitive sense during a pandemic as the notes more commonly used in small, physical transactions are less demanded and we see a net decrease in circulation as they’re slowly destroyed through being lost/damaged and not being replaced.

This surge in $50 and $100 notes isn’t startling, as when stockpiling cash, one would want to hold as much value as possible in the least amount of physical notes possible. Using large denomination banknotes suits this purpose. 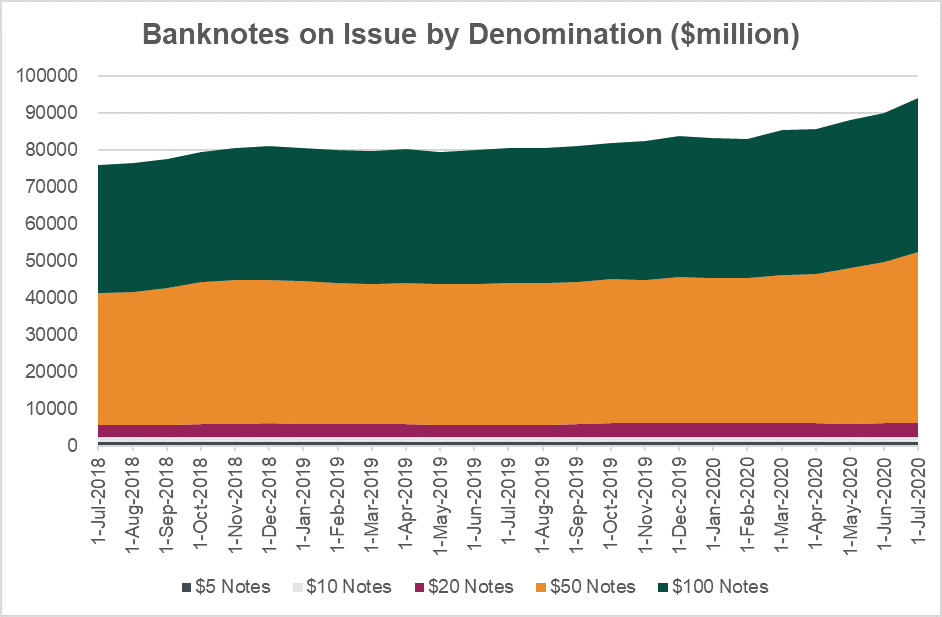 The RBA publishes historical data from Jan 1984 to present, and never in that 36-year history have we seen a spike in bank note issuance such as this – not during the last two global recessions in 2001 and 2007/2008 GFC, or the previous Australian recession in 1991/1992. 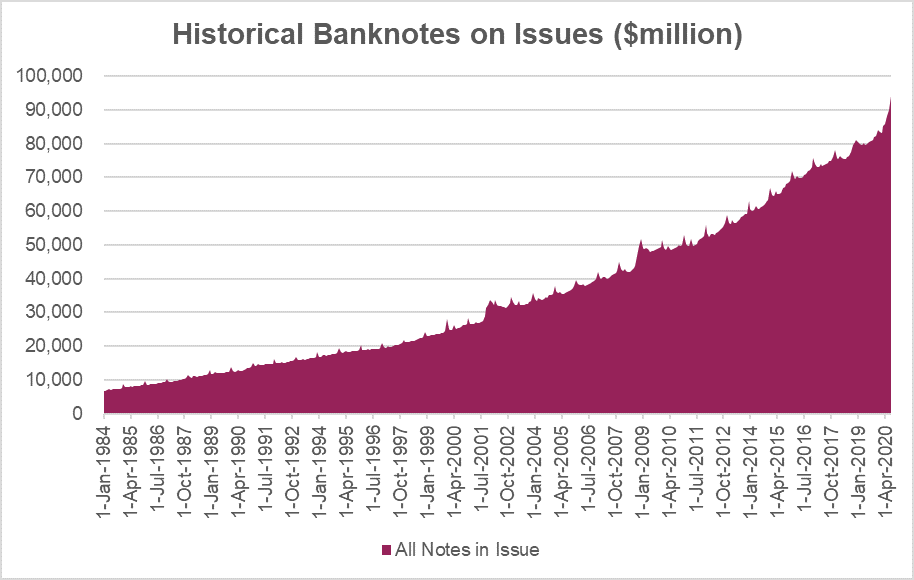 This leads me to believe that a combination of individuals, fund managers, bank treasuries and corporations are getting themselves ready for any potential negative interest rate policy.

I am hesitant to assume the large $10bln increase in note issuance is retail/individual customers because of the sheer volume of new issuance, but also that individual bank accounts are less likely to be passed negative interest rates – something evidenced in Europe where after 5 years retail customers receive 0% interest but not negative interest. However, I note that this fact will not be well known to most Australians.

Corporations, bank treasuries and fund managers, however, will be the first to receive negative interest rates as is common across Swiss (CHF), European (EUR), Japanese (JPY) and Swedish (SEK) banking systems.

The RBA has been transparent regarding their view that they are unlikely to lower the Overnight Cash Rate (OCR) to a negative interest rate.

However, I am also aware that markets can force central banks’ hands by pricing in these rates, and that individuals and businesses can simply not believe the RBA at its word.

For these reasons I believe that banknotes on issue will continue to grow – and likely for similar reasons that gold as a financial asset has seen renewed interest in recent months.

READ TIME 7 mins READ MORE
It's that time of the year where we start to aggregate our views to provide tactical positioning for the 2022 calendar year. I've elected to start off our "Outlook" notes series by tackling what I find to be the hardest...
READ MORE

READ TIME 5 mins READ MORE
In the past month since we’ve spoken about the trajectory of our AUD and its valuation, quite a lot has changed where AUD/USD has found support and the fundamentals are improving. We nuance our views with the concept of “horizon...
READ MORE

READ TIME 4 mins READ MORE
This has been a fast moving week, between a live Fed policy meeting, the AUKUS agreement and nuclear submarines, the looming spectre of China Evergrande missing bond coupon payments, and RBA providing an explicit framework for how it can provide...
READ MORE