The phrase “throwing everything but the kitchen sink” gained popularity during World War II when it was delivered to describe using every possible weapon or methodology against the enemy in order to beat them.

To take the metaphor one step further, governments and central banks have already thrown the kitchen sink at problems before, as quantitative easing (QE) was originally the “kitchen sink” measure used by the Bank of Japan in 1999.

In the USA, QE1 was used in November 2008, QE2 in November 2010 and QE3 in 2012. In 2013, then Fed President Ben Bernanke announced a “tapering” of their QE programme and the bond market had a turbulent sell-off, now dubbed the “taper tantrum”, and QE was not tapered.

Fast forward to today and the world is doing larger and larger QE stimulus, or larger and larger government spending. The USA now has QE4, the RBA is doing our first QE and the European, UK, Swiss, Japanese central banks are all doing their own to boot.

We are now so used to having government intervention in our capital markets that we require an ever-expanding level of stimulus to achieve economic growth – or possibly that we keep having larger and larger problems, which require larger kitchen sinks to “solve”.

We have an addiction to economic growth.

Our political economy is defined by this concept, as it is politically untenable to accept that economic downturns happen organically, nor does anyone want to be the incumbent government when a downturn happens. Hence, we provide larger stimulus or relief efforts to stymy the issue, which is a form of kicking the can – another useful metaphor.

In Australia, we have set the modern-day record for longest period without a recession, eclipsing the previous record set by the Netherlands between 1982-2008. Our current streak is ongoing since June 1991

However, if I told you that if we excluded credit growth (borrowing), our GDP has been largely flat and sometimes negative several times in this near 30-year period?

What about the recessions we have had in GDP per capita, the latest being in Q3 and Q4 of 2018!

This barely gets a mention as we’re addicted to economic growth and only report the positive stories that fuel the growth narrative.

Back to the virus

The current environment and stimulus efforts are to sustain the economy for however long it takes to beat down the virus. Governments are going to do for everyone what has historically been for natural disaster victims – emergency grants, subsidised loans, exemptions from taxes etc.

How do we pay for this?

Governments will issue debt and run budget deficits – or in most cases, larger than current deficits. This isn’t a new normal for the world, in fact if you consider this a war against the virus, then we’ll be increasing public debt the same way we have in previous wars. 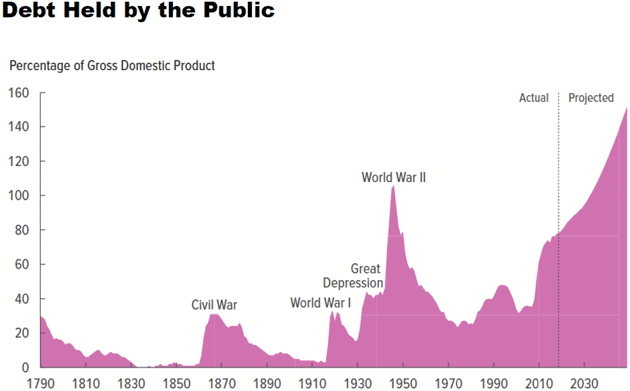 What we are facing is the worst of economic crises – a deflationary spiral.

A deflationary spiral is a downward price reaction to an economic crisis, leading to lower production (GDP), to a decline in real wages, to decreased demand, to then lower prices again as the spiral repeats.

This spiral becomes a vicious cycle, where the chain of events reinforces the initial problem.

When deflation occurs, or is forecast to occur, governments and their central banking agencies enact expansionary policy to spur demand for credit, and thus extend economic growth by not allowing prices to decline.

This is why the relief packages are so large right now, not only because we’re becoming increasingly used to central bank stimulus, but also because the meta-game is so fraught with dangers if deflation takes hold. 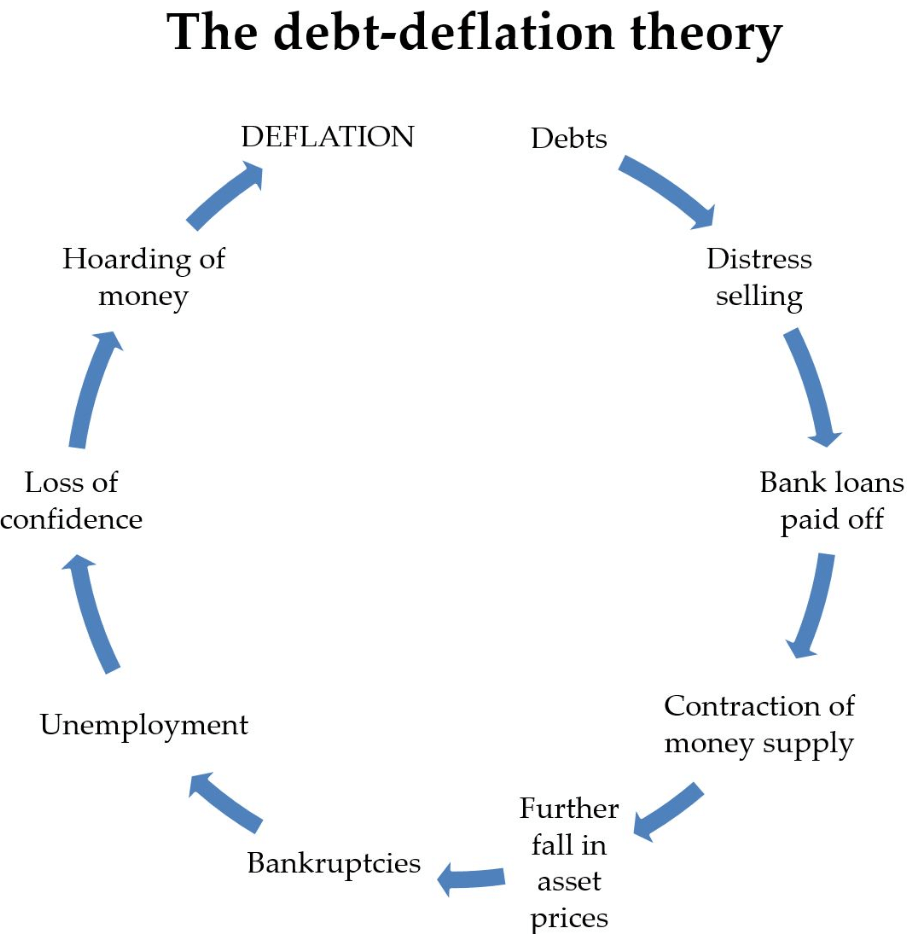 Where to from here?

As a fiscal conservative, I find it hard to say this, but I do agree with the reason for current spending regimes. Maybe not the exact measures that are being taken, but that we do require stimulus and a deflationary spiral will not stop simply because the virus stops.

If we enter a deflationary spiral, and the virus burns itself out, the millions upon millions of workers that are now unemployed will not simply be re-hired straight away, not in a few weeks and it may be months or years. That has severe consequences for rental markets, home loan markets, travel, healthcare, social welfare spending etc.

Already we’ve seen US jobless claims increase over 3.2 million, and this number will grow.

And the above rationale is based upon the virus burning out in the coming weeks/months.

The below graphic is from CNBC news and each yellow icon is an airplane, taken on 11am Friday 20-March. We may believe we’re isolating properly in Australia, and maybe the US believes it as well, but in the USA, there is still so many people traveling the virus is sure to spread, and along with it will be fear and declining economic confidence short of a vaccine being readily available in the next few weeks. 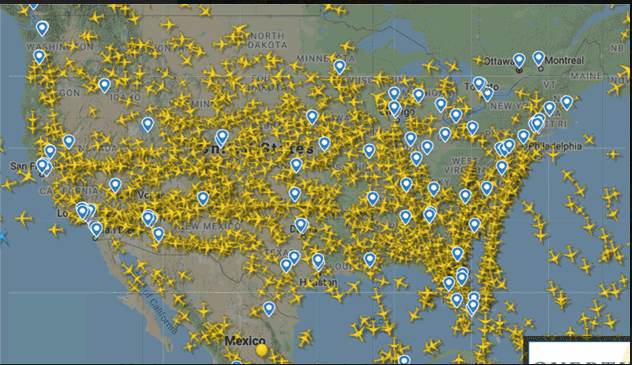 As we saw from the GFC and then the shale oil crises (2014-2016), millions of workers were displaced from these two events and never re-entered the work force. They are not considered “unemployed” by statistics bureaus because they are not seeking more work, but they are out there.

We are addicted to economic growth, but while we may be enacting the required policies to avoid economic depression now…. we must be aware that some government and some generation in the future will have to deal with the consequences.