On Tuesday evening, Commonwealth government Treasurer Josh Frydenberg delivered the 2020-2021 budget (delayed since May) which was brimming with a mix of measures designed to boost near-term demand as well as lift longer-term growth and economic output.

The latter, the long-term stimulus, being the key components for a sustainable recovery.

All-in-all, the Budget papers are over 370 pages long and no easy read, and to fully cover the extent of the proposals – remembering that these proposals will need to be negotiated to pass through the Senate – would far exceed the usual ~1000 words our morning missives adhere to.

Instead, we will focus on the headline budget items and their impacts for financial markets.

The budget for 2020/21 is expansionary in nature and hence there is an explicit deficit in the numbers, where costs/expenditure are greater than government revenue (tax collections).

Treasury’s projections for such forward-looking ratios are based upon economic assumptions that paint quite a rosy picture for future economic growth – growth rates higher than what we achieved in recent years pre-COVID.

This differs from bank economist views that unemployment will likely rise further with the reduction in JobKeeper payments, with unemployment peaking in H1 2021 – at rates higher than Treasury forecasts. 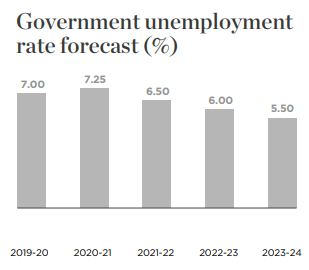 Comparatively, Treasury forecasts the reduction of JobKeeper will not induce a higher unemployment rate, which I assume is part of their base assumption for not extending the programme further.

Overall, these economic assumptions are important as they set the stage for lower debt/GDP ratios than may be realised (i.e. the government forecasts lower unemployment and higher GDP than what may be achievable).

Moreover, the underlying budget cash balance will continue to be negative at 56.2bln AUD in 2023-2024, with no budget surplus forecast.

Tax cuts – 17.8bln AUD was allocated to bring forward the government’s Stage 2 tax cuts, which are sought to be backdated to 1 July 2020. Included in this is a one-off additional support for low and middle income offset in 2020/21 fiscal year.

“JobMaker” – A new Job-word portmanteau has been created to attribute 4bln AUD as part of the government’s new jobs plan, which will pay a weekly stipend to firms that create eligible new jobs and employ workers between 16-29 years old ($200/wk) and 30-35 years old ($100/wk).

Business Investment/Write-offs – 26.7bln AUD is attributed to boost business investments, which will cover 99% of Australian business. Firms will be able to deduct the full cost of eligible depreciable assets until 30 June 2022 in the year installed.

1st Home Loan Deposit Scheme extended – In addition to the already 20,000 spots offered, there will be an additional 10,000 spots offered that sees eligible borrowers able to buy new dwellings up to a certain amount, which varies by city/state. This may see the Government guarantee up to 15% of eligible borrowers’ loans, whereby a person/household can get a loan with as little as 5% equity, 95% loan (95% LVR), and not need lenders mortgage insurance due to the Government guarantee.

Where’s the money coming from?

To fund the size of the deficit, Treasury are issuing new debt (borrowing via bond markets), though the size of this deficit came as no surprise.

In advance of Tuesday’s budget, the Australian Office of Financial Management (AOFM) has been issuing government debt far faster than their required run rate, and bond market participants saw through this and realised the deficit was likely going to be larger than forecast. 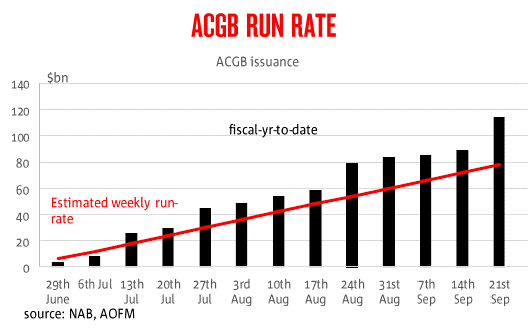 However, AOFM is now forecast to issue an extra 20bln AUD this financial year above the market’s estimate, or 260bln AUD in total by 30 June 2021.

By rough calculation, AOFM only had to issue 4-5bln AUD per week to meet their target, having recently issued two 20bln AUD syndicated deals and the bond market easily digesting the new supply.

In summary, this increase in debt issuance is likely to have little impact in the outright direction of Australian bond prices. No “tipping point” has been reached where further debt funding attracts a penalty (higher) rate.

Rating agencies Standard and Poors (S&P) and Moodys Analytics (Moodys) published summary remarks overnight that can be viewed as a quasi-affirmation of Australia’s AAA credit rating, though still on negative outlook.

S&P expects borrowing costs to remain manageable for some time due to the favourable interest rate environment and has a base case that a COVID-19 vaccine becomes widely available in the 2nd half of 2021, which should allow the government to reduce the budget deficit. Moodys issued a similar statement that debt levels remain manageable.

Given the scale of the forward deficit profile and the fact that infrastructure remains a Budget focus, there is likely to be on-going steepening pressure on longer-tenor bonds on the Australian government yield curve. In particular, 10y to 30y bonds – the below graphic shows the AU yield curve on 7 October (green) versus 7 September (yellow).

While the overall yields are lower at present (green), the curve is steeper than one month ago (yellow).

Similar to the amount of issuance, this was anticipated and was factored into the price over the last few weeks as budget “leaks” were published that mentioned the infrastructure remit, and bond investors foresaw the deficit’s size. 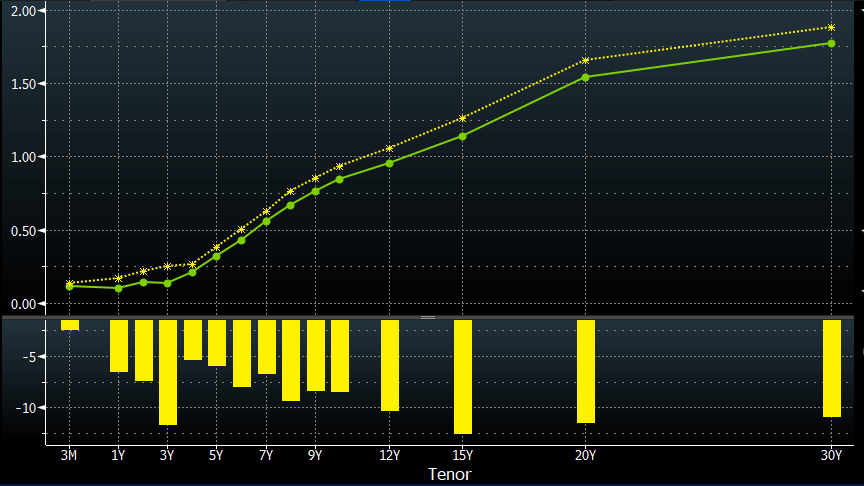 Long-dated bonds have been issued for some-time by AOFM, who has a good track record of issuing such bonds into a positive-demand environment and preferring shorter tenors when such demand is not present.

Given that the majority of similarly rated AAA government bonds trade with a negative yield, Australian govies remain attractive on a “reward for risk” basis versus other markets.

There is nothing in the Budget that should change that equation and I would continue to expect yield seeking behaviour to limit any AU bond underperformance, and given the impending RBA meeting in early November, possibly out-performance if the RBA evolves their mandate to target yields of longer-dated government bonds.

As the government gave little in surprise for Australia-linked asset prices, there was little response from AUD after the Budget, which was part of our overall forecast for AUD/USD into the end of 2020.

Following this, when I wrote these remarks on Tuesday evening, I suggested AUD/USD should remain capped around ~72c mark, and likely more influenced by external and foreign factors than domestic forces.

However, on Wednesday morning, US President Trump ordered his negotiators to stop stimulus talks with Democrats until after the elections which saw US equities down 1.3% and US bonds and USD rally from haven demand.

Hence, AUD/USD was lower as the USD component was up (see red circle).

On this note, this development is substantial as the Democrats will unlikely return to the negotiating table with President Trump publicly stopping talks. This should further boost the Biden camp as Democrats can (1) place the “blame” for a lack of progress on Trump and (2) highlight his objective is to make sure he gets the Supreme Court nomination rather than see to it that those Americans who have lost their jobs get the support they need.

This flight to safety is likely a short-term negative for AUD/USD and US equities, with less effect over a longer time horizon.

Finally, for AUD and tying in our analysis of cross-market bond opportunities – we forecast continued yield seeking investor behaviour with domestic and foreign participation in our bond markets remaining elevated – along with sustained commodity prices and commodity demand – it is difficult to suggest a lower AUD environment at present.

I would imagine the RBA would likely welcome the Budget’s expansionary nature, something the RBA have been vocal about in the last 3-6 months.

This may well take some pressure off the RBA to deliver further easing near-term, something I have been forecasting for the RBA’s November 3rd meeting. However, the near-term challenges the economy faces, especially in H1 2021, suggest the RBA will likely still act.

The preference remains for a new cut to the Overnight Cash Rate to 0.1% from 0.25%, and a decrease in the yield target for 3y government bonds to this same level as well.

There are three main ways to create economic growth:

The Budget has a focus on #1 as it heavily emphasises business spending and investment, with tax incentives to boost take-home pay and employment of younger Australians through JobMaker.

There was a notable absence of policies targeting foreign migration to grow #1 – as population growth is forecast to be flat over the short to medium term.

#3 was not a key focus either, something Australia has lacked for many years as we have been slow to adopt new technologies on a national level.

In terms of consumption, the largest component of our aggregate economic output at ~55%, this will remain affected by uncertainty and higher than normal savings rates. Until certainty is returned, households will likely hold-off spending and this will potentially see monies from tax cuts saved, rather than spent, reducing the efficacy of the budget “stimulus”.

Lastly, I wish to reiterate that the Budget is a proposal and will still need to be ratified into law after passing through the Senate, which at present has a non-Coalition majority.