4
Creative Destruction and the Fed Put

I don’t have a song for you today – nothing really fits the brief.

I want to use today’s missive to talk about the economic term “creative destruction” and the inference that the US Federal Reserve has investors backs and won’t allow investors to lose money.

The read will be a little longer than usual.

Politicians are fond of saying that small business are the lifeblood of an economy, and they aren’t wrong.

The coronavirus has been as economically devastating as it is because small businesses that are critical to economic growth are also vulnerable to disasters.

Small businesses often do not have the geographic diversity to escape localised events the way large corporates can – as business operating solely in Melbourne are currently experiencing.

Also, they often do not have access to capital markets that large corporates do – being able to borrow money globally or raising equity capital to secure funding.

Business that are closed for good

The New York Times has a particularly gripping article about small business owners across the USA that have now closed for good. You can read this here.

The article finds personal stories of owners that are exposed to industries and locations affected by the lockdowns – and closing long-run business because their current franchise is no longer viable in a COVID-19 affected world.

An interesting thing to note is that the economic shutdown is not entirely due to government orders.

I refer to a study from the University of Chicago published in June, using mobile phone data to measure foot traffic in over 2.25 million US businesses.

If you have the time, I recommend the paper as the data is so precise and granular that they compare similar businesses in the same area, but also across county or city limits, where the legal restrictions changed.

Businesses in locations without “shelter in place” orders have barely higher foot traffic than those with government-imposed lockdown rules.

In other words, consumer choices are driving this – not governments – something we’ve mentioned in two recent notes found here and here.

This brings me to the topic of creative destruction – an economic reference to the incessant product and process innovations that oversees goods and services production replace outdated ones.

This restructuring process is entrenched within economic growth and fluctuations, but also fundamental and structural changes, and the functioning of labour markets.

In short – the term refers to business failure (destruction) that leads to better business operations, processes and technologies that proves to enhance economic productivity (creation).

An MIT paper estimates that the process of creative destruction accounts for over 50% of productivity growth. The paper also notes that by impairing workers movements from less to more productive employment, we can lower annual productivity by as much as 1.7% per year.

Of most interest to today’s note:

“In higher doses, by limiting the economy’s ability to tap new technological opportunities and adapt to a changing environment, institutional failure can result in dysfunctional factor markets, resource misallocation, economic stagnation, and exposure to deep crises.”

What we are doing now

The current forms of government policy – not just during COVID-19 but let’s stay focused on the contemporary period – can be considered to support all businesses, regardless if these businesses have merit or not. i.e. a blanket approach.

On a similar note, there are well-established and long-standing criticisms of central banks that maintain interest rates at low levels for protracted periods of time distort the business cycles – which has been proposed to be supportive of larger businesses more than smaller ones.

Current Federal Reserve Policies (all numbers are in USD)

The US Federal Reserve had adopted a “do whatever it takes” policy stance, with Chairperson Powell stating last month (emphasis mine)

“I don’t see us wanting to run through the bond market like an elephant, you know, doing things and snuffing out price signals or things like that. We just want to be there if things turn bad in the economy or if things go in a negative direction, we want to make sure that, you know, we are there.”

Hence, the Fed has created at 750 billion “Corporate Credit Facility” to be used to stabilize lending markets. This is the Fed providing lending facilities to support American business, a business traditionally undertaken by US banking institutions.

The Fed Put is a widespread belief that the US Federal Reserve (The Fed) can always rescue the economy by decreasing interest rates – or most recently – by supporting markets by buying existing debt market securities (bonds) via ETFs or direct bond purchases (quantitative easing).

It’s notable the Fed managed to calm markets in March/April, having only bought 10.7 billion of corporate bonds, well below their total kitty available.

However, it was that the Fed was seen to be there to support markets, just as Jerome Powell stated in June, that market volatility subsided.

However – I propose the question – is this the correct reaction function by investors?

It would be impossible to suggest the Fed Put option, or all central banks for that matter, will be able to support asset markets if problems in the economy – structural problems such as high corporate indebtedness or permanent unemployment – fully come to bear. 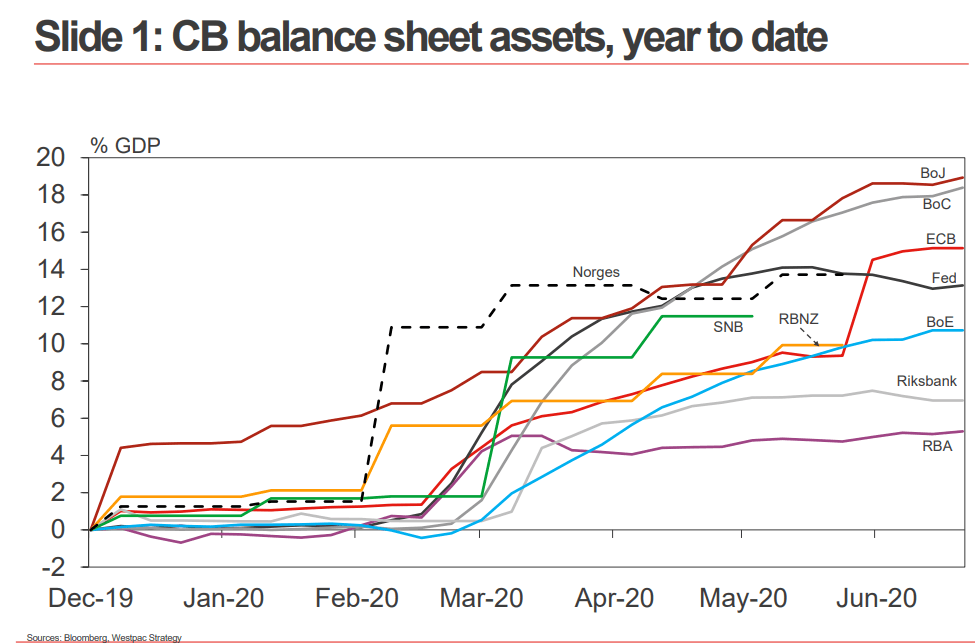 I must admit that I’ve written and re-written this section several times and I firmly believe I want to be as direct as possible to avoid obfuscation.

In asset management and investment – we must establish whether we are investing based upon guiding principles of risk and return, versus speculating on future asset prices.

By investing based upon the assumption that a central bank will support broader market prices – not just their function (liquidity) – we are speculating on future events.

Speculation may be a (small) part of overall investment portfolios – I’m not going to say it doesn’t have a place – but I warn regarding overall strategies that are backed by perceived central bank policies and possible market interventions.

All this leads to capital allocation towards assets – bonds, stocks, currencies, real estate etc – that may not perform as well – relatively – if central bank support isn’t found.

Also, we are distorting economy’s business cycles and the creative destruction that has been so beneficial to economic prosperity over centuries.

Hence, I argue that supporting all business in general through government or central bank support may have far reaching consequences, that lowers economic growth and supports existing large business with access to capital markets – rather than the small businesses so pivotal to innovation and economic growth.

The same legislation that spawned the Payroll Protection Program (PPP) in the USA also authorised the Fed to lend to larger companies as part of their CFF. In buying corporate bonds in the secondary market and giving the Fed the ability to lend via the primary market – the government has allowed the central bank to provide public companies and large corporates with low-cost capital – which small business doesn’t get.

The likely outcome is what we have seen in Japan over the last two decades – more consolidation of industries into larger companies with greater market share, less competition, less innovation and continued presence of “zombie companies” that in other circumstances would not survive. It is the opposite of creative destruction that is so vital to economic growth.