4
A Study of Pandemics

Just to see you smile, I’d do anything, that you wanted me to,

And all is said and done, I’d never count the cost

It’s worth all that’s lost

Today’s note is several weeks in the making, as I’ve taken time to study past pandemics and their long-term consequences for economies, interest rates and wages.

I was put onto this gem – a working paper from the Federal Reserve Bank in conjunction with the University of California – by one of our readers – thank you Michael.

This initial study took me down a rabbit hole of academic journals and scholarly reports, where pandemics (alongside other natural disasters) already have well-established bodies of research across multiple centuries of history.

Firstly, it’s important for us to distinguish between economic fallout from other disasters, as pandemics are distinct from other natural disasters (such as earthquakes) and armed conflicts (wars).

Secondly, in the studies I’ve been reading aside from this FRB paper, they focus on short-term impacts rather than medium- to long-term impacts (i.e. 2+ years after the crisis).

Finally, before we dive into the analysis, there is a large body of knowledge regarding Spanish Flu (1918-1920), but the analysis is complicated with overlaps with WWI, the Great Depression and WWII – all of which affected the time period result – and hence is not included within the study.

In the last eight centuries, there have been nineteen major pandemics with at least 100,000 estimated deaths whereby the pandemic affected multiple countries. If we were to include pandemics where only one country was affected, there would be more, but they are not as relevant to this crisis. 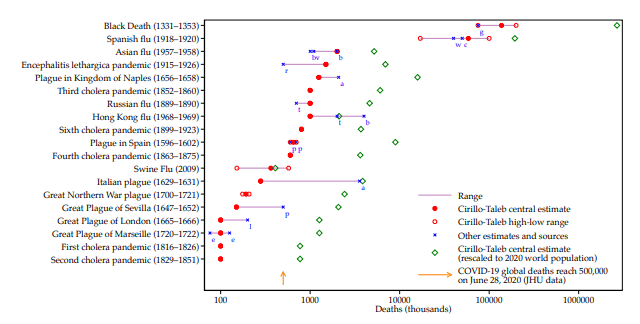 In studying the effects of pandemics since the Black Death and the resulting consequences up to 40 years after each pandemic – it is noted that pandemics induce labour scarcity and a greater shift to precautionary savings – whereas armed conflicts, wars, earthquakes and floods destroy capital. Historically, pandemics do not destroy capital.

If you’re thinking ahead – you may already see that this time could be different – we’ll get to this later.

The effects of a pandemic generally last between 1 to 40 years after the start of the pandemic.

In terms of interest rates – “natural” rates of interest decline and reach their nadir ~20 years later, with the natural rate averaging 1.5% below the pre-pandemic rate.

Compare this to times of financial crisis – real rates can be depressed by a similar amount, but only for 5 to 10 years. However, pandemics are far more pronounced, with real interest rates remaining depressed for a far longer period. 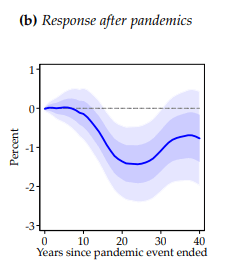 Responses by various nations to pandemics are quite heterogenic. Historically countries such as France, Italy and Spain have much larger declines in interest rates, compared to Germany, Netherlands and the UK. 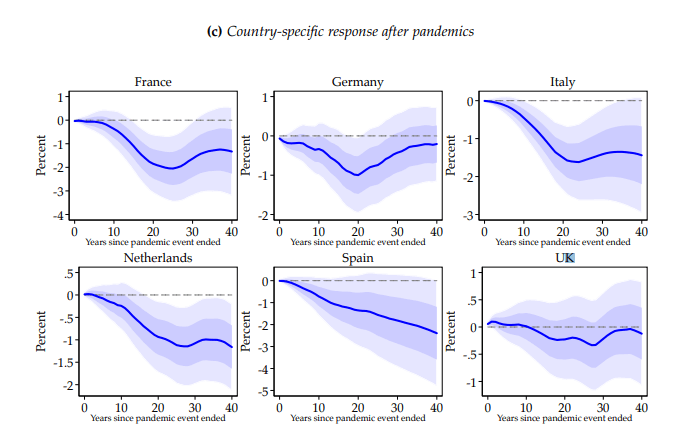 It is important to immediately separate pandemics that stem from war periods to avoid bias to the results.

The first historical case of a pandemic stemming from a war – and possibly the first influenza outbreak – occurred among Athenians after the Peloponnesian War (citing Thucydides, 2.47-54).

As our studies define a pandemic as an event with more than 100,000 deaths, we are identifying episodes with large contractions in the labour force, and hence a change in the ratio of labour to capital (i.e. labour is contracting with respect to a stable capital/wealth base).

Hence, we know there will be differing effects on economies when compared to wars, which can be seen in studying both UK and European interest rate and wage data:

I draw your attention to the above graph (b) and the representative change in real wages from Great Britain’s pandemics.

Pandemics historically see real wages rise. This is due to the large number of deaths lowering the number of persons in the labour force. This shortage of workers is unable to service the same level of aggregate demand, hence an increase in real wages given capital has not been destroyed during a pandemic.

The cumulative result is that over the 40-years post pandemic, historically real wages grow +15%.

This also ties in with capital returns being lower post-pandemic, as (higher) wage costs erode the internal rate of return.

Why This Time Could Be Different

Studies establish that pandemics are followed by sustained periods – over multiple decades – of depressed investment opportunities, possibly due to higher precautionary savings (lack of confidence) and excess capital per unit of surviving labour.

Ultimately, it comes across that previous pandemics were around survival, something that came across very strongly from studies regarding Black Death and Spanish Flu. I question whether our social mood is of the same view, due to our greater global education and awareness of facts and virus statistics through the internet and mass media.

Also, we are focusing more on economic growth and the trajectory of recovery (V-shape, U-shape, W-shape etc), rather than survival, on-going health issues and 2nd and 3rd wave infections.

Furthermore, government budgets are in a historically bad position compared to other pandemics, and central bank interest rates are at all-time lows. This constrains the ability for governments to refinance recovery.

Either way, if the trends play out similarly in the wake of COVID-19, then the global economic trajectory will be very different than was expected a year ago.

Should we expect a decline of 1.5% in natural levels of interest rates?

But this “lower for longer” period may be far longer if the COVID-19 pandemic plays out anywhere near the average assessed in the studies summarised above.

However, there are still many unknowns that will inform our knowledge base.

Firstly, the death toll of COVID-19 relative to total populations may be smaller than the worst pandemics of the past, but we currently don’t know this for sure.

Secondly, COVID-19 has a disproportionate effect on the elderly, who are no longer in the workforce and spend a lower proportion of their capital base than younger generations.

Thirdly, the aggressive fiscal expenditure has been undertaken to levels not experienced before. This boosts public debt further, reducing national savings rates and might put upward pressure on interest rates – and is part of the reason that central banks, such as our own RBA, have enacted “yield curve control” policies to cap interest rates of certain securities, lest the yields rise and act as a hand-brake upon governments and corporate borrowing capacity.

Lastly, a natural attenuation of COVID-19 through time, or via vaccine, is not yet known. The speed of either circumstance will influence events as well.

Historically, pandemics of the last millennium have been typically associated with subsequent low returns to assets/capital, higher real wages and higher precautionary savings.

We are already seeing higher precautionary savings as a result of the pandemic, where households and fund managers are holding higher cash balances during the uncertain period.

A majority of businesses have seen a decline in revenue due to these higher savings rates, resulting in lower return on assets (ROA).

Real wages are the hardest to perceive, as the measures taken by individuals in isolation, and governments in further enforcing isolation policies, have thus far reduced the destruction in life as observed in other pandemics.

Unless the overall ratio of infected or affected persons as part of the labour force increase, I imagine we won’t see higher real wages in the future – which should see a relative higher return on capital seen in previous pandemics.