Listening to the wind of change

With the publication of ANZ’s Q3 results last week, we closed the reporting season for our Big Four Major banks – ANZ, Westpac, NAB and CBA.

This reporting season was more interesting than most due to the shocks and uncertainties in what revenue and net interest margins would be, and what forward guidance (if any) would be given to guide investors’ expectations for the coming quarter and year ahead.

In particular for the Big Four, we were watching for positives and negatives associated with COVID-19 and loan deferrals.

However, we were also keenly aware that the way these banks provisioned for potential losses would impact their capital ratios, their profit figures and any potential dividends for equity holders.

Today, I’ll continue what’s becoming a tradition for reporting season in publishing a note about the Big Four banks from a credit point-of-view, taking a closer look at outcomes relevant to creditors (bond holders) and any worrying signs we see when reading financial statements.

In the depths of uncertainty in March 2020, the Australian banking sector allowed three-month deferrals on outstanding mortgages, with possible three-month extensions, which had end dates (subject to the initial approval) in September/October for the majority.

This has led the major banks to conduct “check-ins” where they could proactively look to return mortgage payers to their regular payment schedules, reducing the outstanding stock of deferred loans.

Westpac seemed the most proactive of the Big Four, reducing the loan deferrals from 7% of their total home loan book by 40%, or 4 to 4.5% of Westpac’s total home loans by value.

On the other end of the spectrum was ANZ, whose mortgage deferrals remained in double digits, already having been at a higher starting point compared to Westpac’s 7%.

On the SME front, commentary from NAB and ANZ showed that SMEs are continuing to struggle with loan deferrals in the 15-20% range. 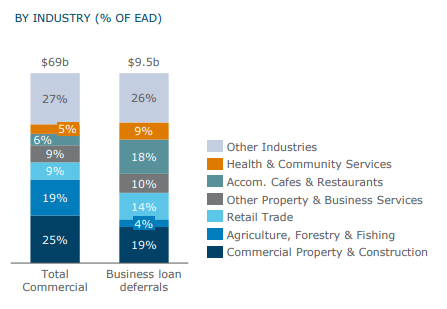 However, I note that over 70% of both bank’s business loans are fully secured, with another 10-20% partially secured, which reduces the likelihood that these banks realise any losses from loan impairments or defaults.

Nonetheless, it appears that CBA and WBC are handling their check-ins and revaluations more proactively, though whether this proves to be realised in better asset quality and lower mortgage delinquencies will be found in future results.

Westpac was the outlier in provisioning for impairments and losses after having already raised large COVID-related provisions in March quarter end.

Westpac took a different route by maintaining high provisions in June as well, essentially recognising future credit deterioration for at-risk borrowers now (early), whilst the other three major banks may have to realise these losses later.

As Westpac does not have a significantly different geographic mortgage-lending footprint to the other majors, nor different macro-economic assumptions, this was a question of management style than a difference in their lending book or economic modelling. 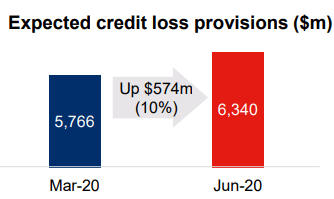 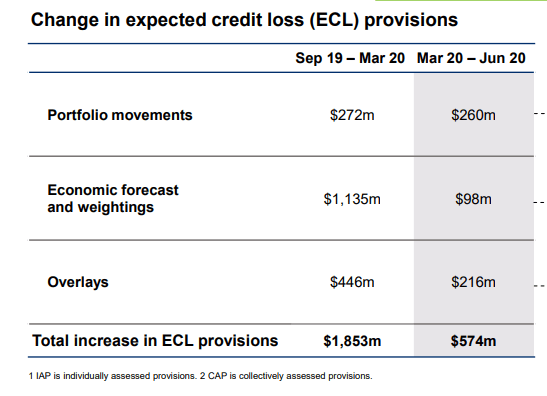 While it has been widely reported for months about cash hoarding, it has not been common knowledge that this deposit growth was largely confined to the major banks – and global custody banks such as JP Morgan and State Street.

When reading through APRA’s monthly banking statistics, I note that large corporates, government accounts and superannuation fund deposits are the largest drivers of deposit growth, whose holdings are more concentrated within custody banks and Big Four banks rather than regional banks. 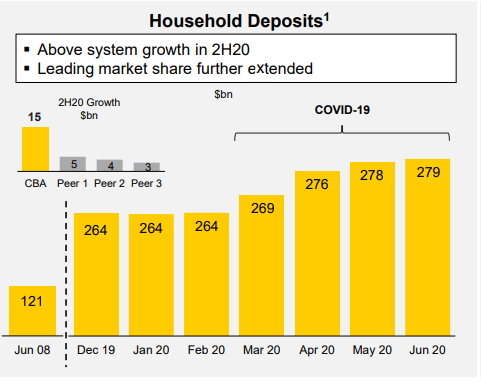 This deposit growth seems to be sustained and not simply a risk-off trade, something we’ve studied and is associated with pandemics and historically has lasted many years.

What this means is that the recipients of this deposit growth are less likely to issue senior unsecured debt as the deposit funding lays on their balance sheets. 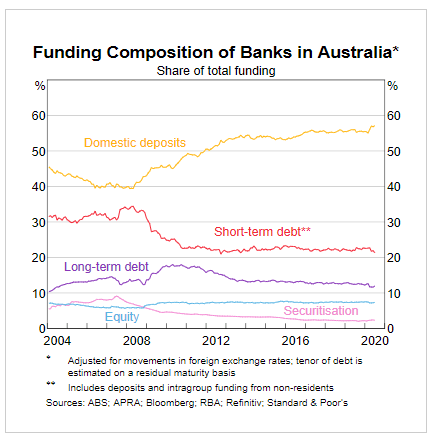 The “unquestionably strong” capital ratios have proven to be resilient during this pandemic, and the regulatory “pause” on credit risk from COVID-19 deferred loans has certainly helped.

Common Equity Tier-1 (CET1) ratios of the majors have increased 0.30% to 1.2% while Risk Weighted Assets (RWA) has decreased – which the exception of Westpac for the above-mentioned decision to add credit provisions for their commercial lending book.

This CET1 growth means the Majors are in no hurry to issue new Additional Tier-1 (AT1) capital instruments (think hybrids), and they are able to be opportunistic in issuing new Tier-2 securities (regulatory capital) – though NAB and ANZ have both issued in recent weeks.

As such, capital ratios are robust with our Major Banks maintaining higher CET1 ratios than the majority of global banking institutions – bar a select few.

Overall, the Big Four results were strong, given the circumstances of a global recession amid a pandemic.

From a bond holder point of view, I would be encouraged by the bank’s ability to raise additional equity capital, which is lower ranking capital than senior and subordinate (Tier2) debt, adding an increased layer of protection to creditor’s investments.

Moreover, I was impressed by CBA and Westpac’s ability to transition a sizeable portion of their COVID-19 related loan deferrals back to regular payment schedules, which should maintain their revenue figures while their net interest revenue is declining (lower interest rates).

On deposits, the Big Four have barely drawn upon the RBA’s Term Funding Facility, which can be utilised if further funding is required, if or when deposits recede. This gives more certainty regarding their ability to fund themselves via capital markets (or in this case via the Reserve Bank), with a known cost of funds at 0.25% which is hard to beat.

Lastly, we will remain vigilant regarding loan deferrals as these next 3 months will be key in how these banks transition customers to regular loan schedules (if possible), as this is likely the largest drag on asset quality and revenues.