On Top of the World

4
On Top of the World

On Thursday evening, the heads of the Reserve Bank, APRA and ASIC gathered together to host a webinar regarding the Australian financial services sector.

The most interesting topic is APRA chairperson Wayne Byres noting it would not be a concern to the prudential regulator if Australian Major Bank’s (ANZ, CBA, NAB and WBC) capital ratios were to fall from their current “unquestionably strong” levels, on a temporary basis. While temporary basis is a timeframe open to discussion, I took this to mean while the current pandemic persists and for at least until 2021.

If you have an interest in the performance of our major bank’s equity, hybrids and bonds, please bear with me as I set the scene so the gravitas of these remarks can be better understood.

What exactly is capital?

Capital is often referred as the cornerstone of an institution’s financial strength and minimum levels of capital make up a core component of world-wide banking prudential regulation for deposit-taking institutions and insurance companies.

In a non-technical context, capital is described as the amount of cash or assets held by the company.

However, in the regulatory context, capital is not an asset, but is a liability – as it is considered to be owed to shareholders.

Like debt, capital can fund the purchase of assets (or a bank writing new loans), but not associated with any particular asset.

The best way to think of capital is:

Capital is important as it is the measure of financial cushion available to absorb any unexpected losses experienced through business operations.

If we think of this in the context of the current health crisis for banks, such losses include loans that are defaulted upon or written-down or written-off. Insurers may also be seeing unexpectedly high volume of claims that elevate revenues.

Capital is not costless.

Shareholders and other investors seek a relatively high rate of return for bearing the risk of financial loss, while financial institutions are incentivised to minimise the capital on their balance sheet.

As a result, regulators such as APRA set a minimum level of required capital for banks and insurers to ensure a high degree of safety.

This requirement manifests in a set of capital ratios to standardise the measures of risk across comparable banking institutions.

While there are several capital ratios, the highest quality measure is known as Common Equity Tier 1 capital (CET1).
CET1 is considered the gold standard because it does not result in any repayment or distribution obligations on the institution. As a result, it is the riskiest for capital owners and therefore carries the highest cost (generally pays the highest returns).

ADIs are expected to maintain a prudent (self-imposed) buffer above these minimum levels so that the regulatory minimums are hardly ever breached. APRA also requires forward looking capital management plans to avoid capital falling below regulatory minimums, which ADI’s continually update. 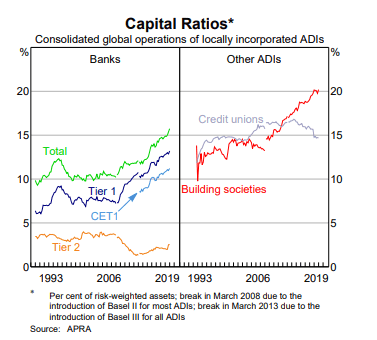 Back to the news at hand

APRA chairperson Byres news is quite timely for this reason as our Major Banks have all reported their quarterly performance disclosures and their capital ratios in the last month.

Byres noted that if Major Banks CET1 ratios fall below 10% for this temporary basis, the regulatory will not force them to raise capital, as long as the ratios are returned to levels above 10% after the crisis abates.

What this means for equity and hybrid investors

APRA has signalled to investors it will not require dilutive equity raising if lenders see their CET1 ratios decline in months ahead.

Byres repeated the observation that the banks had entered the pandemic in a strong capital position, with CET1 ratios roughly double that of the GFC.

As such, capital ratios could act as a “shock absorber” during times of stress.  i.e. high ratios in good times allows for stability in the bad times.

This allowance from APRA allows for a various mix of implementations across the four banks, though the loosening of requirements did come with strings attached.

Byres said that capital should be used for fuelling loan growth or absorbing loan losses, rather than rewarding shareholders – citing APRA’s insistence that banks show restraint of dividend payments to equity owners.

However, I view this as an increased likelihood that hybrid security owners receive their coupon distributions in the future – whereas there was some uncertainty until now.

I will not speculate on the exact implementation here – and each bank will have a different capital mix resulting in different decisions.

Overall, the result should be viewed as positive to equity and preference (hybrid security) shareholders, and short-term negative for bond holders (as their subordination may be lowered). The exact results are an unknown unknown, depending on how the banks position or reposition over the coming months.