Over the weekend I found myself reading an excerpt from Thomas Macaulay, a British historian in the early 1800’s.

In 1830, T.B. Macaulay wrote in reply to the pessimists of his day:

“We cannot absolutely prove that those are in error who tell us that society has reached a turning point – that we have seen our best days. But so said all who came before us, and with just as much apparent reason… On what principle is it that, when we see nothing but improvement behind us, we are to expect nothing but deterioration before us?”

Real world GDP (accounting for inflation) is up over 1500% since Macaulay wrote the above passage.

The cost of a candle in 1800 that allowed for one hour of use, cost six hours of labour.

Today that same amount of light costs less than a second of human labour.

The current crisis won’t slow down the current age of innovation, and let us not forget, “necessity is the mother of invention.”

The Aussie bond market comes back to life

Our domestic market has been relatively shut these last eight weeks to non-AAA rated issuance.

There has been plenty of smaller government bond tenders, or bank covered bond issuance (all AAA), but nothing below the most highly rated of issuance.

This was in stark contrast to offshore markets such as the USD and EUR bond markets where Australian companies such as QBE and Transurban have accessed funding at levels not too far out of line of levels that would’ve been achieved in Q4 2019.

Even multi-national companies such as Yum Brands (sub-investment grade rating) and Carnival (a cruise liner conglomerate deeply affected by the crisis) were able to issue bonds in offshore markets during this period – an indication that central bank intervention within credit bond markets was supporting new issuance as well as secondary market trading.

However, last week the AUD bond market came back to life after an extended period absent of primary corporate transactions.

In a staggering show of demand, investors placed AUD $53bio in bids for the 1% coupon bond, issuing $19bio in total.

This bond easily surpasses the AOFM’s largest ever syndicated bond deals, in terms of both bids received and amount issued. 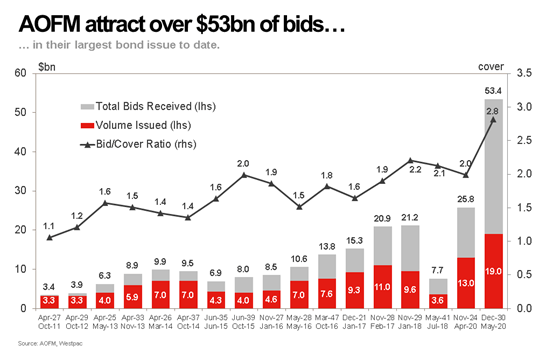 If you are interested in who is funding our Australian government, 46.2% of the investors were non-Australian based. While this means that over half is from domestic participants, the remaining 46.2% is broken into 19% Asian, 10% UK, 4% Europe, 13% continental North America and little bits from elsewhere in the world.

While the bond was considered “cheap” by 0.02% compared to other outstanding Australian government bonds, the key drivers of this unprecedented demand was the sheer volume of cash in the system along with Australia’s AAA rating, low currency presenting strong risk-reward potential for global investors.

In fact, Australia is currently the highest yielding AAA-rated sovereign bond issuer and is also attractive when compared to lower rated countries including the US, UK and NZ (all rated AA). This is in part due to supply fears in the $A market, but also the pricing of other country’s yield curves to negative rates (USA and NZ), which see their inherent yields drift lower.

This dynamic tends to be supportive of AUD bonds as long as it continues. 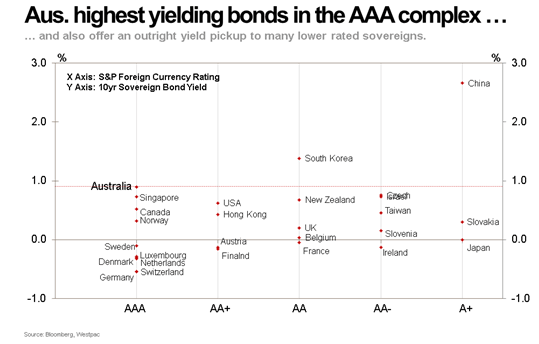 Anecdotally I’ve noticed that the AUD bond market is showing more signs of life, with more quotations, larger volumes trading and more primary deals being sounded-out in the market.

As such, I would expect such government and corporations to come to market with debt issuance that were moth-balled from February until now. There is plenty of cash sitting on the sidelines that could be used to buy into any deals that show value.

This may be seen as a buying opportunity for long-term credit investors, who now are presented with the chance to buy higher-rated debt at 2018/2019 levels, when the cash rate is now lower – meaning they receive a higher premium.

It can be seen as an opportunity to be active yet selective.