Last week the ABS released Q1 2020’s GDP figure, telling us what we already knew, that economic output declined in Q1 this year.

Australia has gone 114 quarters without a technical recession and is now almost certainly going to experience the first for 28.5 years, with Q1 GDP printing at -0.3% for Q1, and forecast to be deeply negative for Q2.

While this result is quite lagged in publication – result is published 3rd of June, or just over 2 months after the end March – the market largely looked through the result, with bonds, equities and currencies already looking to price in the coming weeks/months, knowing Q1 and Q2 are largely going to be “bad”.

GDP is the total value of goods and services that Australia produces, and a recession is categorised by two consecutive quarters of negative GDP growth.

It feels like a long time ago, but our GDP figure was going to be lower than usual due to January’s bushfires and drought, as well as the early stages of the coronavirus impact.

We are experiencing a recession right now – Treasurer Frydenberg was quick to comment last week that we are definitely in a recession – not an economic depression. However, we won’t technically be in recession until the ABS publishes Q2’s GDP result in September.

An economic depression being a recession that lasts three or more consecutive years; or a decline in annual GDP of 10% or more.

This difference is largely academic, as we know that a large portion of Australian workers, families and businesses are hurting.

To fully understand the reason this data is being ignored by financial markets is the lag between economic experience to publication.

For example, March’s unemployment data showed an increase of 1k jobs for the month, whereas in April we saw a 594k decline – 8x the previous record monthly decline on record.

A collection of advanced indicators – and most indicators are more advanced and timelier than GDP – points to a very large decline in GDP in Q2.

I’ve seen current forecasts of declines between 6-8% q/q for Q2 GDP, which would be the largest quarterly decline in Australian GDP ever, by a large margin.

The below chart refers to the RBA’s forecast for Australian GDP before COVID-19 hit the economy, and even in their lowest base case scenario (the lower light blue colour) did they envisage the economy would contract by so much. 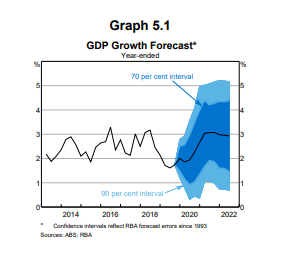 Devil’s in the Details:

Picking apart a few key details of the overall GDP result, household consumption and our tertiary services industry bore the brunt of the economic contraction.

Household consumption fell by 1.1% in the quarter, and the weakest result since 1986 – but wasn’t quite as large a drop as one would imagine. The reason being, March saw a spike in retail sales due to panic buying, which brought consumption forward from April’s levels. We saw April’s retail sales data last week as well – down ~18% – and the main reason that Q2 GDP is expected to be so negative.

Public demand (government) on the other hand, was strong as the Commonwealth and State governments stepped in to provide stimulus after the bushfires and during the starts of COVID.

Lastly, the national accounts provided some key insight into what people are thinking:

Our national savings rate rose to 5.5% – which is also likely to spike higher for Q2 as households and business retain cash rather than spend on activity.

The resilience in commodity prices and lift in our terms of trades was a rare bright spot, considering this was the weakest quarter for China so far with their isolation policies coming into effect for the majority of Q1.

Gross Domestic Product is a sign of living standards in our society.

The change in GDP tells us if our economy is growing, and we also have sub-indices such as GDP per capita that tell us if the economic is growing proportionally across all persons or centred on certain industries or wage-earning brackets.

The current result is that our living standards have as a whole, deteriorated and our national economy is worth less than in Q4 2019, right now.

This means that the Government is receiving less money in taxation revenue and has less to spend in the next financial year’s budget.

We also know that the government is issuing debt in order to finance the current budgetary deficits, which will have lasting impacts on the economy.

GDP per capita fell by 0.7% q/q for Q1 and was negative on an annualised basis as well – meaning that per person, Australian workers are producing less economic output than the previous twelve months.

However, this may not result in wage decreases as sometimes is expected with decreased economic output – this time is different – and the optics are certainly ugly for business that look to reduce wages from current levels.

We would imagine that financial markets will look through the negative economic data sets of Q2 2020, as we are all imagining the results are bad, looking for green shoots in future growth prospects once we get through the government-imposed measures.