“A noble craft, but somehow a most melancholy! All noble things are touched with that.”

I’ve been asked before to keep an eye on video game companies, often an overlooked part of the market, which have surprised to the upside one too many times for investors to ignore.

Rather than simply address the exponential growth in game companies in the last decade, I thought we could take a look over one key driver of that growth and the potential hazards it faces.

Readers who are at least tangentially involved in consumer demographics will be familiar with the concept of “whales”, consumers who spend regularly and generally at the pricier options of your products.

Whales are the subject of rigorous study by economists, social engineers, marketing professionals and focus groups around the world. Synonymous with the study of whales are ‘microtransactions’, small purchases of typically between $1-5 using premium or real-life currency; once reserved for free games as a way of generating revenue they are now employed in nearly all major releases on the market today.

In the context of video games, and particularly ‘free to play’ gaming, whales make up approximately 2% of the user base whilst contributing over 55% of microtransaction revenue – typically purely visual or cosmetic items which are designed to create a ‘haves and have-nots’ culture by separating visually from each other.

They are lucrative consumers; they are specifically targeted by increasingly complex sales mechanisms.

And they are also more than likely your children.

Yes the Moby Dick quote was no simple bait-and-switch, if you’ll pardon the pun; one of the largest drivers of revenue growth in the video game industry may in fact be consumers between the ages of 10-16, and for many reasons this growth will be unsustainable in the near future. For sake of brevity I’ll just explore two.

Let’s start with a big risk, both ethically and legally: microtransactions are very often gambling mechanics targeted at children.

For example, a ‘loot box’ is a consumable item which can be bought in-game and is essentially a game of random chance, opening the box may yield a simple visual change to your character, an important item or equipment for the game or any other quantifiable prize to be used within the game. Imagine a slot machine, only dressed up prettier (if you can believe that) and in a medium in which minors have full access to these features.

Don’t let the moral ambiguity dissuade you, savvy executives of the video game industry, for Electronic Arts (EA:NASDAQ) alone brought in USD 993M from microtransactions in Q3 of 2020 financial year. 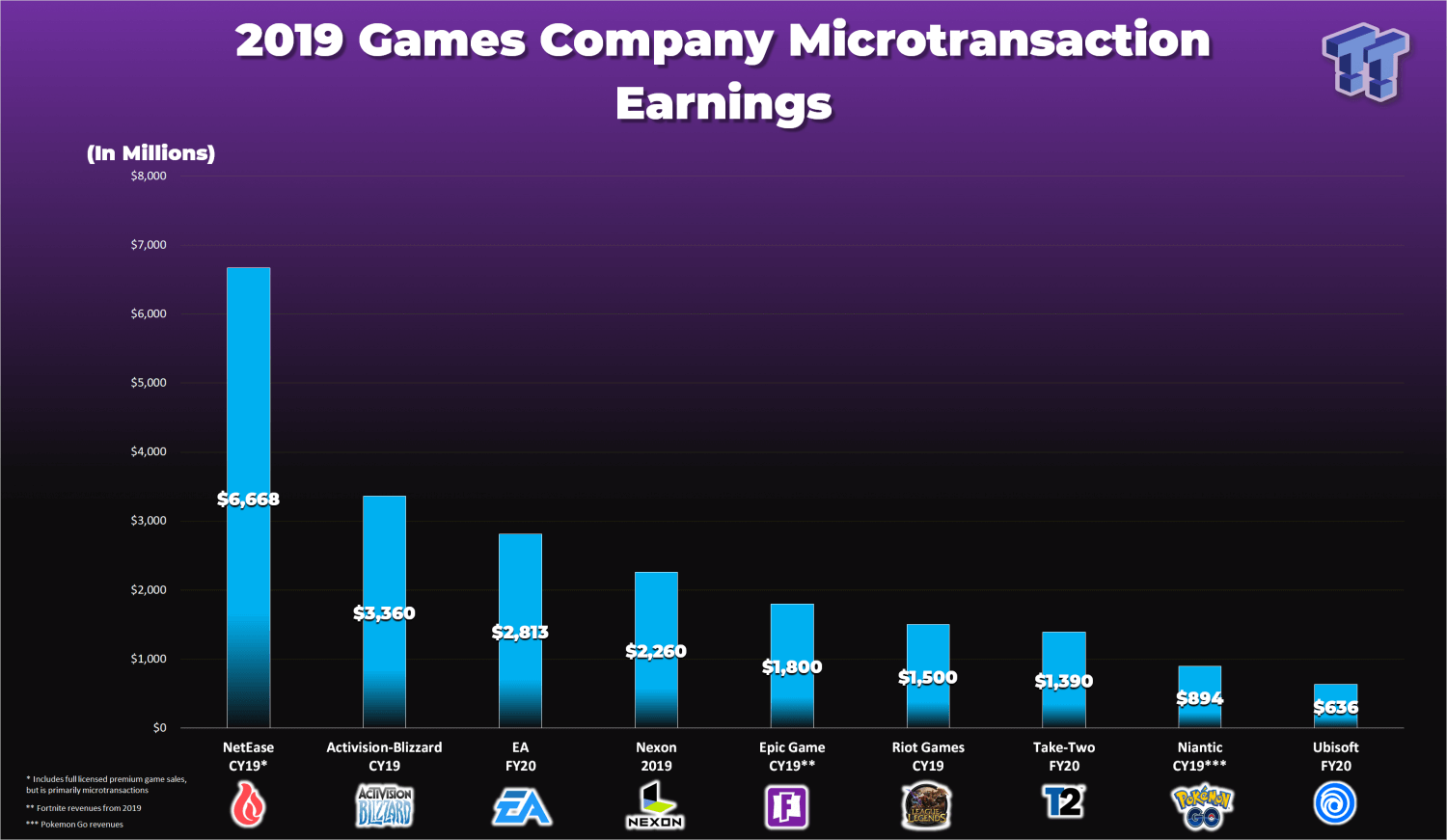 Enter the Belgian Gaming Commission, who banned loot box mechanics in April 2018 for ‘violation of gambling legislation’, threatening criminal action against EA and any other publisher who had random-chance consumables available for real money in their games. Not long after the UK and Canadian government joined suit, calling to ban the mechanics and calling out EA’s latest game at the time ‘Star Wars: Battlefront II’ for encouraging gambling to children through a child-friendly brand name. Where enough legislation can be mustered against microtransactions, large developers like EA stand to lose up to 60% of its revenue through one stroke of law.

Another challenge facing the sustained growth of gaming revenue is keeping users engaged in what is arguably one of the fastest changing and most volatile markets of the entertainment sector. Keeping ‘whales’ on board for long periods of time is the key to revenue growth: they transact around the same as 50% of the rest of the userbase but will spend over 10x the average transaction.

This brings us to the issue of ‘recurrent consumer spending’, or the ability to keep users consistently engaged and spending within the game.

If that name doesn’t carry much gravitas to you, I should then let you know that GTA V and its online component are the highest grossing entertainment product of all time, bringing in over USD 6bn by April 2018. Off an initial development budget of $265M, this number would bring a tear to the eye of any James Cameron property. In fact, GTA V was the only game released between October 2013 and October 2018 by Rockstar Games, and yet its publisher Take-Two Interactive (TTWO:NASDAQ) saw a 670.67% increase over the performance of that one title alone.

But from the period of January 2018 to September 2018, the active daily users for GTA Online fell by over 70% and has remained consistently there since. This is not coincidentally, the exact time period in which the massively popular Fortnite first came to the forefront of the public eye.

The very audience that generates revenues of such magnitude for GTA and for Fortnite are easily distracted and won over by the product of the hour (Fortnite’s own competitor Player Unknown’s Battlegrounds was at the forefront of the race before its audience was consumed by the former and PUBG disappeared into the depths of a distant second place).

Unlike almost any other industry, large video games can simultaneously attract a healthy pod of ‘whales’ for a short moment before they drift to the next big thing – the real upside to be found for investors is in a product that can hold an audience there and maintain that ‘recurrent consumer revenue’.

If there’s a grounding principle to this digest, a maypole for all the figures and history lessons to dance around, it is this – it is tempting to look at the numbers large game developers post at the end of the financial year in awe, and look for the next up-and-coming title opportunity, but we must consider who the real audience of these titles are and how realistic it is that this growth can go on forever.

A general principle I’ll admit, but one that is particularly relevant to an industry where a key demographic are young, vulnerable and cannot be relied upon forever as a source of consumer spending. As the crew of the Sea Shepherd have been telling us for years, hunting whales must stop eventually.